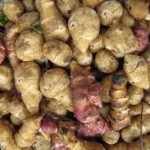 “Topinambur”, also called Jerusalem Artichoke , sunroot, sunchoke, or earth apple is a member of the sunflower family (as are artichokes) and native to North America.

The tubers are elongated and uneven, thick, and vaguely resembling ginger root in appearance, with a crisp texture when raw. They vary in color from pale brown to white, red, or purple.

The artichoke contains about 10% protein, no oil, and a surprising lack of starch. However, it is rich in the carbohydrate inulin (76%) (Not to be confused with Insulin), which is a polymer of the monosaccharide fructose. Tubers stored for any length of time will convert their inulin into its component fructose. Jerusalem artichokes have an underlying sweet taste because of the fructose, which is about one and a half times sweeter than sucrose, making it a great natural sugar substitute.
Inulin is digested in the large intestine by microorganisms, resulting in several interesting phenomena. It does not spike blood sugar, making it an alternative food for Diabetics, and it acts as a dietary fiber by binding water in a gel and moving food through the digestive tract.

Even though the owner of this blog receives compensation for advertisements, we always try and give honest opinions, findings, beliefs, or experiences on those topics or products. The views and opinions expressed on this blog are purely the bloggers' own. Any product claim, statistic, quote or other representation about a product or service should be verified with the manufacturer, provider or party in question.