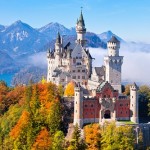 Healthy Living also means taking a time out, relaxing and taking a vacation.
All families need to get away once in a while, and Disneyland and Disney World are on top of the list for a lot of kids. But how would they like to see the “Real” Castle?
Neuschwanstein Castle  in the Bavarian Alps,was the inspiration for the castle at Disney World and is absolutely gorgeous!
It is located  on a rugged hill above the village of Hohenschwangau near Füssen in Southwest  Bavaria,  Germany.

Rooms in the area are very reasonable, with kids up to 6 years staying for free and kids between 7 and 12 pay half price. A double room at the Hotel Schwangauer Hof  for example,is 67.00 Euros a night and that includes a breakfast buffet.
http://www.hohenschwangau.de/schwangauerhof0.0.html

There are 2 castles in the area, Hohenschwangau Castle, where King Ludwig II grew up, and Neuschwanstein Castle.

There is also the Museum of the Bavarian Kings where you can explore a permanent unique exhibition. Take a journey through time into the history of the Wittelsbach dynasty and their Bavarian Kings. Experience the history of King Ludwig II and his family in authentic vicinity of the royal castles. Precious objects, fascinating stories and interactive media stations will provide you an extraordinary insight into the history of the former Royal Family and their still living descendants.
Tickets for the Castles and the Museum can be bought at the same location.

The website http://www.hohenschwangau.de has special events, opening hours and everything else you need to know about the area.

There is also the lovely Linderhof Palace, located about 45 minutes away from Neuschwanstein Castle. This is a cozy “little” castle you will just love

Get leaflets for free at http://www.schloesser.bayern.de/englisch/service/index.htm, you can order them or download them.

Munich, the Capitol of Bavaria is about 1 hour and 45 minutes away and also worth a visit.
While  you are there, visit the Nymphenburg Palace, the birthplace of King Ludwig II on  August 25, 1845,The Baroque Palace is the main summer residence of the former rulers of Bavaria of the House of Wittelsbach.
http://www.schloss-nymphenburg.de/englisch/palace/index.htm
Don’t miss the Munich Christmas Market  between Nov 27 – Dec 24, 2014, it is the oldest market in the City and goes back to the 14th Century!
http://www.muenchen.de/rathaus/home_en/Tourist-Office/Events/Christmas

Herrenchiemsee Palace , located on the Herreninsel, an  island in Lake Chiemsee, is another one of King Ludwig’s Castles. Modeled on Versailles, this palace was built as a “Temple of Fame” for King Louis XIV of France, whom the Bavarian Monarch fervently admired.
http://www.herrenchiemsee.de/englisch/n_palace/

From Wikipedia, the free encyclopedia:

Ludwig II or Ludwig Otto Friedrich Wilhelm, (25 August 1845 – 13 June 1886) was King of Bavaria from 1864 until his death. He is sometimes called the Swan King (English) and der Märchenkönig, the Fairy Tale King (German). He also held the titles of Count Palatine of the Rhine, Duke of Bavaria, Duke of Franconia, and Duke in Swabia.
He succeeded to the throne at  age 18.  He commissioned the construction of two lavish palaces and the fantastic Neuschwanstein Castle, and was a devoted patron of the composer Richard Wagner.

Ludwig spent all the royal revenues (though not state funds) on these projects, borrowed extensively, and defied all attempts by his ministers to restrain him. This was used against him to declare him insane, an accusation which has since been refuted.
Ludwig is generally well-regarded and even revered by many Bavarians today. His legacy of architecture and art includes many of Bavaria’s important tourist attractions.
On  June 13th, 1886, at around 6 PM, Ludwig asked his psychiatrists Dr. Bernhard von Gudden to accompany him on a walk through the Schloß Berg parkland along the shore of Lake Starnberg. Gudden agreed; the walk may even have been his suggestion, and he told the aides not to accompany them. His words were ambiguous (Es darf kein Pfleger mitgehen, “No attendant may come along”) and whether they were meant to follow at a discreet distance is not clear. The two men were last seen at about 6:30 PM.; they were due back at 8 PM but never returned. After searches were made for more than two hours by the entire castle staff in a gale with heavy rain, at 10:30 PM that night, the bodies of both the King and von Gudden were found, head and shoulders above the shallow water near the shore. The King’s watch had stopped at 6:54.
Read the whole story at http://en.wikipedia.org/wiki/Ludwig_II_of_Bavaria

Even though the owner of this blog receives compensation for advertisements, we always try and give honest opinions, findings, beliefs, or experiences on those topics or products. The views and opinions expressed on this blog are purely the bloggers' own. Any product claim, statistic, quote or other representation about a product or service should be verified with the manufacturer, provider or party in question.